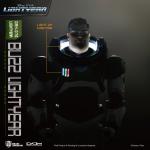 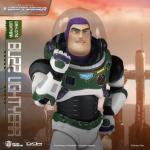 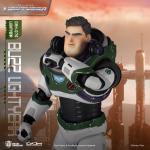 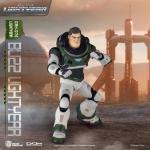 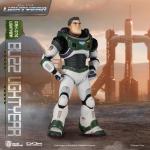 Pixar and Disney are ready to take Toy Story fans to new realistic heights with the release of ‘Lightyear’!
Whilst Buzz is taking a break from the fun loving toy image fans have grown to love, he is instead shown as a heroic figure, with realistic features in the upcoming movie. An origin story of sorts, Buzz is given a mission to a distant planet, with his friend and robotic cat by his side to fend off an evil alien invasion led by the evil Zurg! Will our space faring hero survive! Watch the movie and relive the best scenes after with your very own action figure!

Beast Kingdom’s highly articulable DAH (Dynamic 8action Heroes) figure range is ready to take you ‘To Infinity and Beyond’ with the release of the Buzz Lightyear DAH-076 figure. Following the more realistic take on Buzz, the DAH features 20 points of articulation and two highly detailed head sculpts to match. The detailed ‘Alpha’ armor suit features the detailed emblems and color schemes from the movie. The DAH set also includes an arm-mountable laser gun and a set of four replaceable pairs of hands to really get Buzz’s salutes on point! The built LED lights also give fans ample ways to show off the chest indicators for the ultimate effect. Not forgetting the robotic cat Sox and a cat carrier are also both featured in the set.
A fantastic set for fans of Pixar’s most famous Space Trooper! Don’t forget to also take home the DAH-077 Zurg to complete the collection.