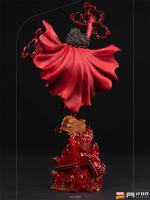 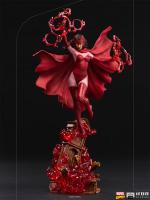 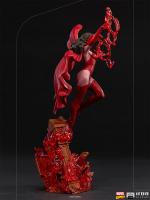 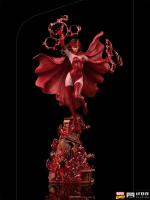 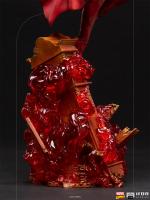 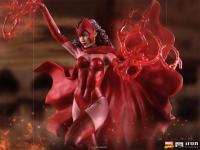 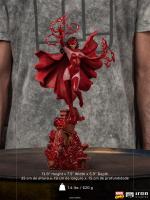 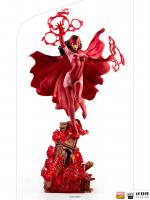 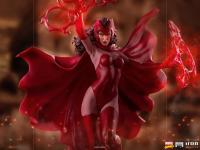 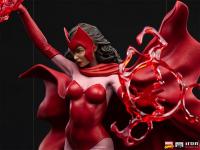 Scarlet Magic in a new statue from Iron Studios!

She can control Chaos Magic, which allows her to manipulate probability and even distort and change reality itself. On a base where she floats with her power, on an old column chime clock, with the remains of rubble from a heroes' mansion, but also sending a subliminal message as if she were bending time and space, Wanda Maximoff, also known as Scarlet Witch, manipulates bundles of supernatural red energy with her hands, and her imposing presence intimidates any opponent. As if she came straight out of the pages of the Marvel comics, joining forces with her twin brother sprinter Quicksilver previously revealed, Iron Studios brings her statue"Scarlet Witch - X-Men - BDS Art Scale 1/10 - Iron Studios", with Marvel's most powerful mystical heroine.

Created by the legendary Stan Lee and Jack Kirby in 1964, Wanda was born on Wundagore Mountain, in the fictional Transia - Eastern Europe, and, together with her brother, was once considered Magneto's mutant daughter, but recently it was revealed that both were enhanced by geneticist called High Evolutionary. Initially, she joined the Brotherhood of Mutants of her supposed "father" and later, along with her brother, was recruited by the Avengers under the command of Captain America.

Wanda was adapted in the MCU and played by actress Elizabeth Olsen but gained greater prominence and worldwide popularity in the series WandaVision, streamed by Disney+. As in the films and series, in the comics, Wanda also became involved in a romance with the synthezoid Vision, whom he married. Unlike the series, in the comics, she was trained by the witch Agatha Harkness, her mentor, to become one of the most powerful manipulators of magic on Earth.

As a figure that is part of the X-Men vs. Sentinels Diorama, which is controlled by Magneto, Scarlet Witch can defend, alongside her brother, the mutant heroes, students of Prof. X, but also to join her mystical forces with the Master of Magnetism and his Brotherhood. It can also, individually, complement the team of the most emblematic statues of the Avengers. It all depends on each fan and collector, as multiple probabilities are Wanda Maximoff's specialty.