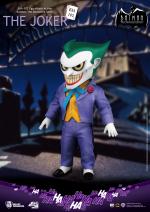 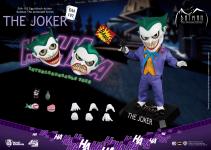 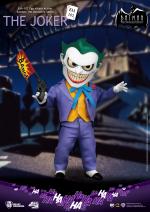 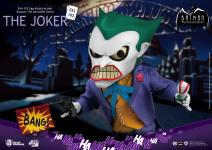 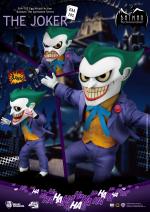 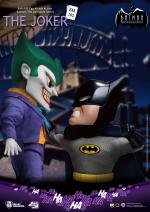 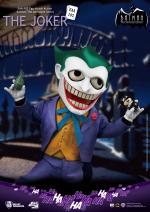 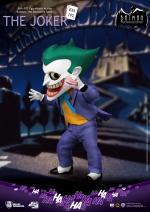 Just as there is light, there is always darkness, and just as there is Batman, there is always a Joker. The Ying to Batman’s Yang, the Clown Prince of Darkness has forever been in the shadows of the caped crusaders fight for the soul of Gotham!
A sinister, menacing figure, The Joker has had many iterations in the nearly 70 years he’s graced our comics and screens, and whilst he once was an ordinary man, his origins have been mostly shrouded in mystery.

With the many iterations, the Animated Series is often considered one of the best comic-book style animations of the Batman world ever made, and with Mark Hamill’s excellent performance as the Joker, a generation was introduced to a dark and exciting version of the character.
Following the release of the EAA-Batman, Beast Kingdom is proud to introduce the Egg Attack Action Joker from Batman the Animated Series.

Befitting of any crazed villain, the Joker is seen with his classic purple suite, orange vest, bow tie and 3 replaceable facial expressions fit for any occasion! Collectors can now reenact any of his signature ultra-creepy expressions as well as having the ability to pose him with a high degree of articulation.
The figure also packs a series of accessories so the Joker is ready for any situation with Batman, including four pairs of replicable hands, a clown grenade to fight off his enemies, a Batman Doll for those lonely clown nights, a mutated clown fish, clown dentures and the infamous pistol that shoots out a bang to scare any foe! With a great selection of accessories, high mobility and the use of real cloth for clothing, make sure you don’t miss out on this Joker figure!

Part of the new DC Egg Attack Action series make sure to grab the Animated Series Batman to complete your collection today!

Considered by many to be the definitive animated version of Joker, Mark Hamill’s version of the Clown Prince Of Crime is recreated in an all new Egg Attack Action design, complete with multiple facial expressions, real cloth purple suite and a bevy of accessories fit for any maniacal villain!